In July, USY’s Israel Pilgrimage group arrived for a three-day stay at Hannaton as part of their tikkun olam programming. In the mornings, participants volunteered in a variety of local settings, such nearby farm fields where they picked vegetables designated for recipients of Leket Israel, Israel’s largest food bank. In the afternoons, they met with youth from Kfar Manda, the Arab village a few miles down the road from Hannaton.

The week was overall very successful, but in particular, participants and staff alike mentioned 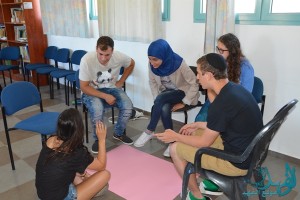 the time spent together between the USY group and their youth counterparts in Kfar Manda as the most impactful. I have to note that over the past year, we have had a number of meetings between the Hannaton mechina participants and Arab youth, so I’ve been able to observe what happens in the room during these meetups. This time, the connection between our USY group and the group from Kfar Manda was so strong — they connected so quickly and strongly — that we were all taken a bit by surprise. We could theorize about the many reasons for the difference, but regardless, it was interesting to witness the differences between meetings of Israeli Arabs and Israeli Jews (where each side arrives with their own baggage and suspicions towards the other side), as compared to Israeli Arabs and American Jews.

During the first meetup, the participants got to know each other through a kind of speed-dating 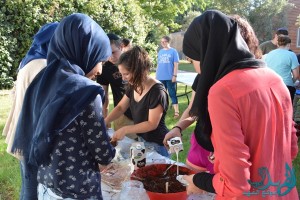 ice breaker activity, while learning English and Arabic from one another. In the second get-together, they talked about their religions – Islam and Judaism – and cooked a meal together. The third meeting included a tour of the local museum in Kfar Manda and a discussion about the challenges each group faces, as an Arab in Israel and as a Jew in the U.S. There was also some discussion of politics.

It’s easy to see from the many photographs the participants took of each other over the three-days how quickly they warmed to each other and how eagerly they approached the other’s culture in an effort to learn and engage. Both groups also blogged about their experience in their native languages. I am certain it’s a “mifgash” both parties will not only remember fondly, but use as an emotional foundation for future meetings with someone they may consider as the “other.”