Visiting Hannaton was the perfect way to kick off a full year of experiencing Israel through both study and community. As second year Rabbinical students, we had come to expect the highs and lows of this unique path. I knew that spending 24/7 with my peers in an immersive educational environment for this two week period in Hannaton would be as challenging as it was inspiring. Hannaton’s beautiful surrounds and warm community were the perfect balm for what was also a sufficiently challenging obstacle course and heart-warming muscle warmup to start building our stamina for a year spent engaging with topics around Israel, Zionism, diversity and pluralism.

When we began our rabbinical school journey, we were told how important it is for Israel and America to learn to engage, to cross-pollinate, share community and listen to one another’s ideas, but of course that’s more easily said than done. Being in a place like Hannaton, which is committed to diversity and pluralism, meant that we were gifted a smorgasbord of all of the best teachers the Galil – and really the entire Israel – has to offer. It was refreshing to experience classes that were both Torah-focused and also incorporated personal life journeys of rabbis who ranged from Reform to ultra-Orthodox, with Torah that varied from modern pop culture to mysticism and through an incredible array of hands-on experiences from contact improv to meditation to cooking, all backed with deep knowledge of Judaism, Israel and Torah. Hannaton allowed each of us to flourish in ways we don’t always have access to within the walls of the Beit Midrash, bringing out the musicians, dancers, basketball players, and even bike technicians among us who were given a chance to share our gifts and our Judaism with the community.

Touring the Galil with an experiential and educational approach was unlike any other tour I’ve ever seen, and for a group that consisted of many former leaders of teen and college-aged trips, that was much appreciated. Our visits to the local towns in the area to learn from Muslim and Christian clergy and Bedouin councilpeople were powerful in showcasing to us the possibilities for coexistence in Israel, witnessed through the lens of the North rather than the conflicts in the center. The classes that focused on the importance of narrative, the variances in historical interpretation, and the nuances in building foundational Zionist culture were eye-opening, fascinating and honestly, could have been the entire curriculum as far as I was concerned. Each class was another jaw-dropping glimpse into the multifaceted Zionist story, and whether we were exploring musical tributes to the Yom Kippur war or formerly ultra-Orthodox secular Zionist Midrash-based texts, each was another journey into illustrating the vast potential in Israeli and Jewish culture and thought.

I found it very moving to be alongside the Mechina students when they joined us and provided another living example of young, pre-army teens who are deeply committed to their personal growth. I was grateful to witness the sunrise ceremony when they arrived at Hannaton and found it inspiring and heartwarming to see the responsibility and community being woven by these young future leaders. 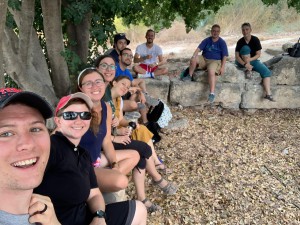 JTS students hiking in the Galilee

Hannaton in itself is an incredible laboratory for pluralism in practice; with a community that doesn’t always agree but definitely seems to do their best in working together to find the optimal solution for their children, their families, their homes and their personal cultural and spiritual lives. We loved visiting families for dinner, participating in the annual kids’ triathlon, utilizing the community’s mikveh and getting to know locals at shul or on the street. Seeing a place where I could envision myself living with my future family was emotional and even jarring in a certain way, realizing that it is possible for people from all areas of the secular-religious spectrum to live together and work together to build a positive environment for their children.

As an Elul-focused program, the Hannaton-JTS curriculum also included many shiurim relating to teshuva, the newness of Rosh Hashanah, and the process of creating the world. It was appropriate to be exploring these topics alongside the deeper questions of Zionism, pluralism and Judaism, as we learned that teshuva is a real approach to life and that the world can indeed be made new again through the efforts of compassionate, committed, spirited and hard-working people like the amazing Hannaton staff.

A special shout-out to our educator par excellence Ayal Beer, whose humor, openness and honesty was the perfect balm for a group of graduate students in the midst of a deep adjustment. Ayal’s colorful stories, deep knowledge of the content, and personal focus on everybody’s needs to ensure that we were learning but also caring for ourselves was paramount.

As future rabbis, Hannaton was a place where I was able to see the type of community I envision building one day. It was a place where I began to finally look inside and work with my personal ambivalences, beliefs and disappointments regarding Israel’s many narratives, with a safe space and framework to explore those assumptions and their associated challenges. It gave me access to a variety of teachers and their approaches, many of whom I hope to continue a connection with even as I return to the States. And it gave me a thirst for learning more, a desire to come back for a follow-up program, and a realization that the Hannaton Mechina program is probably exactly what every rabbinical student needs at eighteen, if only we could swing it!

Rishe Groner, a second-year rabbinical student at the Jewish Theological Seminary reflects on her two-week stay at Hannaton.