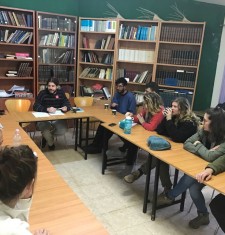 Gabe Ende is a graduate of Queens College and the University of Chicago. Since making aliyah in 1969, he has taught in numerous educational institutions around the country.

Brig. Gen. (Ret.) Avishai Hadari is a Research Fellow at the National Security Studies Centre and Geo-strategy Cathedra at the University of Haifa. With many years in the IDF, he is also a security consultant, advisor and lecturer worldwide. Avishai previously served as the Academic Director of the International Centre for National Security Studies (ICNSS) at the Galilee College and a Commander of the Senior Police Officers Academy.

Dr. Rachel Korazim is a freelance Jewish education consultant specializing in curriculum development for Israel and Holocaust education. Previously she was the Academic Director of Distance Learning programs at the JAFO Department of Education and one of the founders and directors of a special program for soldiers from disadvantaged backgrounds.

Prof. Yisrael Levine is Professor Emeritus of Jewish History and Archaeology at the Hebrew University of Jerusalem.  Author of The Ancient Synagogue: The First Thousand Years, 2005.  Prof. Levine has also taught at Yale University and the Seminary of Judaic Studies in Jerusalem. He has directed several archaeological digs, among them a dig in Caesarea and the excavation of the Hurvat Amudim Synagogue.

Yaala Cohen Mazor coordinates the Shared Regional Tourism Project at Sikkuy and a facilitator at the Ghetto Fighters’ House Museum. She has an MA in Art and Society.

Rabbi Haviva Ner-David is the Director of “Shmaya”: A Ritual and Educational Mikveh, and the founding director of Reut: The Center for Modern Jewish Marriage. She is the author of Chanah’s Voice: A Rabbi Wrestles with Gender, Commandment, and the Women’s Rituals of Baking, Bathing, and Brightening. She received her Ph.D. from Bar Ilan University.