Opening up to the New Year

Home > General > Opening up to the New Year

How often do we hear stories, where the narrator begins to realize it is falling flat and trails off with, “I guess you had to be there”? In an era with seemingly endless methods of communication and sources of information, it may feel like we can know the world without leaving the comfort of our couches, but there is still truth in the conclusion that, yes, sometimes you just have to be there in order to comprehend the fullness of an experience.

The JTS Year in Israel program for rabbinical students begins at Kibbutz Hannaton. Being at Hannaton has given us the opportunity to immerse ourselves in stories we would not experience if we spent our entire year in Jerusalem. We would not have sat in a coffee shop in a Druze village a 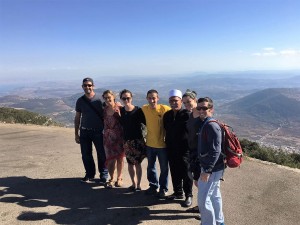 The group on Mt. Ha’ari in Beit Jan

nd met a man who, while explaining Druze beliefs to us, also revealed that his Yiddish was likely better than ours. We might have studied maps, but we likely would not be able to identify various mountains among the hills and valleys of the lower and upper Galilee, let alone the rocks and geological events that created them. We would not have sat around a table with children who made aliyah, learning about the transition and their hopes and fears as they changed cultures and countries. We would not have woken up hours before dawn to hear selichot services in Sephardi synagogues in Tzfat, followed by our own Shacharit on top of an ancient fortress overlooking the city. We would not have attended a Bedouin wedding in a neighboring village or volunteered in a hospital ward that represented every type of person in this country. We would have learned from incredible teachers, but we would not have had the opportunity not only to study with experts in a range of fields, but also to live among them and be guests in their homes.

One of our sessions this month was with Rabbi James Jacobson-Maisels, an expert on Jewish spirituality and meditation who lives here. He taught us that for Hassidim, the word “simcha,” which we usually translate as “happiness,” can also refer to emotional openness. This month has opened me up to so many new people and narratives, which have given me a new frame to enter into 5777 and my year in Israel.

Jessica Fisher is a second year rabbinical student at the Jewish Theological Seminary. Prior to rabbinical school she was the director of the Chicago Diller Teen Fellows and worked at the Greater Chicago Food Depository. Originally from Cincinnati, Jessica is a graduate of the joint program between JTS and Columbia University.