One amazing volunteer experience among many

Home > General > One amazing volunteer experience among many

Daniel Lerner participated in the Hannaton mechina this past year. He is from Ganot Hadar in the Sharon region. In August he will enter the IDF and serve as a medics’ instructor.

Every Tuesday, 11 of us went to the Emek Hospital in Afula to volunteer with the Haverut organization. Half the group went to the pediatric ward to help children who just underwent surgery or were being hospitalized for other reasons. The rest of us went to the rehabilitation ward, to visit with individuals recovering after surgery, some amputees, as well as those undergoing long-term rehabilitation.

Our job was simple — to cheer the patients up, to bring a smile to their hearts, to help them forget the physical and mental pain through music, conversation, and play. 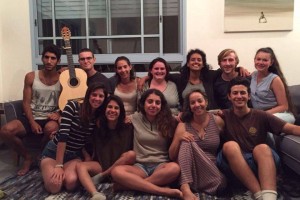 I was privileged to volunteer with my amazing friends from the mechina and to be guided and accompanied by Ariella Shalitin, a member of the kibbutz and a volunteer at Haverut. Ariella was a mother to all of us. Before every hospital visit, we met together in the ward, to prepare ourselves emotionally prior to each meeting with the patients, and after to sum up our experiences when the visit was completed. Each session with Ariella was filled with love, song, and fun.

Volunteering with Haverut was not just about the work at the hospital. It was about the drive from Hannaton to the Afula bus station where each week we met the same individuals who make up the town – the man who sells nuts, the street musician.

Volunteering with Haverut was about one day each week focused on giving of yourself: to sit in a chair and just listen for two hours to a Holocaust survivor tell his story or a person who just lost his legs tell his.

Volunteering with Haverut was about playing with an Arab child, even when there was no common language, and being witness to his laughter and smiles the whole time.

Volunteering with Haverut was about singing Ashkenazi songs with Sephardi Jews and getting everyone up to dance to the song “Peace Will Come.”

Volunteering with Haverut was about being moved each week by my friends, Avishai and Arnon, who played guitar and sang from their hearts.

Volunteering with Haverut was simply the best day of the week in mechina — with best friends.