Meeting our Neighbors by Elad Arnon

So, in a moment of rest, with a new baby, I’m allowing myself to ponder the empowering experience I recently had at the Educational Center.

I traveled by minibus with a group of young Brazilians from NOAM, the youth wing of the Masorti movement, to meet with our neighbors in Kfar Manda who live just two kilometers from my home in Hannaton.

On the way, I asked myself to whom do I feel closer – the young people I am traveling with in my role as Education Director at the Center or those people I’m going to meet in just a few minutes, who I have never met but who live within walking distance from my home.

These thoughts helped me understand just how strange the situation is in which we live. My travelling companions are here as Jews visiting Israel in an educational program and the people we are going to meet simply live nearby. Since arriving at Hannaton with my wife Nirit two years ago, I have felt no need to go to Kfar Manda, to meet with people there, to use the services they have to offer or even to walk around and see the village.

Brazil, on the other hand, is a far-away country on the other side of the world, exotic and attractive. Friends of mine traveled there and loved it. I know the country primarily because of it’s amazing successes in soccer, Carnival and several movies made about the complexity of life there.

I ask myself how the Jews who live there can be closer to me than my neighbors who are, geographically, so nearby. For me, this was a real illustration of what the political scientist Benedict Anderson called an “imagined community”.  Anderson held that nationalist movements created a feeling of closeness between people who otherwise had no real connection to one another besides a symbolic, cultural connection that was fed by the education provided by society. Our Moslem neighbors are truly physically close to us and it is I who avoided getting close to them for the simple reason that the frameworks in which I was educated and nourished – my family, school, social network and the media – prevented me from wanting to go there and meet my neighbors. 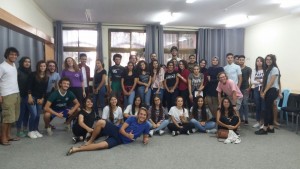 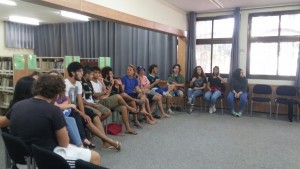 And this is where the strange feeling comes in. I think that the hesitancy, so many Israelis feel about entering an Arab village – even a neighboring one –  feeds the conflict by breeding greater alienation and fear and separating us even further.

The meeting we had upon our arrival was very moving for me. The principal of the high school in the village received us with warmth and excitement. He arranged a meeting between the young people from the “imagined community”, who came from so far away, and the students in the school, who I would never have met had it not been for my role at the Center.

I certainly know that in cross-cultural meetings like this one, and especially in a reality in which there is a conflict between the groups, there are certain codes of behavior. These codes stem from both actual need and political interests, and lead to politeness and decorum. Despite this, I have no doubt that in that meeting, there was also a naive human desire to simply get to know and accept another person as is – me, as a representative of Hannaton with members of an imagined community and us accepting them as our nearby neighbors who are so far from us.

I felt that I experienced a very human connection which raised many personal questions for me, questions that are encouraging me to try to get to know my neighbors. And I believe that it is possible to bridge the immense divide that stands between us and our neighbors. And at the same time, I had the very comfortable sense of an almost familial closeness with those people who came from another continent.

I don’t believe that the connection Jewish communities have to Israel is an imagined community. I feel connected to the Zionist idea, as part of my identification with the sources and the existential need of my grandparents, who, within the Zionist framework, came to Israel and took pains to ensure that I receive the education I acquired. I am a proud Jewish Zionist. Having said that, at my core, I am first and foremost a human being. And it’s painful for me that our reality planted in me a feeling of alienation towards my nearest neighbors.

I will end with a wish that we might find the right bridge to bring us truly closer to our neighbors, and to continue to come together to meet. To educate towards correcting the reality that brought us to this alienation from our neighbors and to admit to the great mistake we made – as individuals and as a society – that made me deaf to their language, blind to their pain and mute to the ability to communicate.

At the meeting, we communicated in English, the language in which nobody felt fully at home. The language, however, enabled us to build a kind of “Abraham’s tent” which helped us overcome the language barrier through the welcoming of guests and the feeling that in the end, we all come from the same ancient father who is himself “imagined”. They laughed, they enjoyed, they took pictures and they talked. Some even touched on painful subjects. Nevertheless, there was a real human experience of getting closer to one another, even without anyone directing the conversation, but with just the desire to meet.