Jewish Identity in the IDF

Developing an Israeli and Jewish Identity

As part of the orientation of the staff of commanders of the Nativ course of the Kiryat Moriah unit in the army, I returned to Hannaton, where I had a spent a year in the Mechina pre-army program. I wasn’t prepared for the strong impact our visit would have on my fellow staff members.

The Nativ course is offered to non-Jewish soldiers or recent immigrants (and sometimes both) with the aim of strengthening the soldier’s Zionist or Jewish or Israeli identity and, especially, to help raise questions about identity in relation to military service. After completion of the course, soldiers who wish may continue their learning.

In the army the approach is “Your people are my people, your God is my God”, from the Book of Ruth.  In other words, joining the nation is no less important than becoming a member of the religion, so a soldier in the Israeli army is already well on his or her way in this process of joining the community.

The Struggle and Finding Compromise

With its lofty goals, this course has its struggles.  Many times there is an understated conflict between wanting to help participants explore the often-heated issue of serving in a predominantly Jewish military on behalf of a Jewish state and glossing over what comes up in discussion in an effort to make participants feel more comfortable. 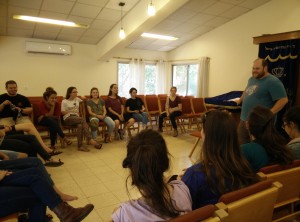 On Hannaton, however, my group was offered a new and refreshing perspective on pluralistic community life and the choices we can make regarding religion. We met with Itai Capsuto, the head of the mechina as well as Yedidya Hazani, the manager of the Educational Center. For many of the soldiers in the unit, it was their first time hearing about the fascinating life of a mixed, Jewish community.

In preparation for the visit, our unit discussed issues related to our course – Jewish and Israeli identity — and in the long-term, the possibility of converting in the state of Israel.

Seeing Hannaton in action whether we were in the synagogue, on the grounds or inside the classroom at the Educational Center showed us that there is more than one correct way to approach these topics, despite their complexity.

Ofir graduated from the Hannaton mechina in 2013