Enough with the Witch Hunts: I also have the Right to Express Myself

Home > General > Enough with the Witch Hunts: I also have the Right to Express Myself

Enough with the Witch Hunts: I Also Have the Right to Express Myself

In contemporary Israeli discourse, where many opinions are expressed, including those commonly seen as peculiar or even contradictory,  dissenting or contrary voices are often excluded and frequently people rush to make judgments. It is vital that a public space exists where different people can meet.

I grew up in a Hasidic family, and was educated in ultra-Orthodox Hasidic institutions. I live according to these traditional laws and standards and educate my children accordingly. I have never held extreme opinions, and I have never had a problem hearing and relating to views radically different from my own. However, as a religious person who believes in the existence of Truth, and a way of life that the Creator has bequeathed us, I have often found myself expressing strong opposition to views which contradicted those truths which were so clearly evident to me. Moreover, my opposition to such views also led to similar feelings regarding the people who live according to those viewpoints. It took me a long time to distinguish between my own clear world of beliefs, and my relationship with and my ability to accept and even love those whose views were the very opposite of my own.  Gradually, I came to understand and even internalize the complexity of other peoples’ worlds, and that even though they may view things differently from me – this does not diminish their importance and it certainly does not justify my looking down upon them.

Over the years, I came to realize how important it is to expand one’s circle and to make connections with people from different communities. This awareness stemmed from my feeling that the divisions within our people have deepened way beyond proportion, and that these differences are tearing our people apart. I sensed that a deeper engagement with “the other”, which could evolve from these meetings, might contribute to a stronger sense of commonality within our people and a greater acceptance of the diversity among us.

For several years, I was active in a number of frameworks. I strove to create connections between various streams and communities within our people. Yet despite a certain sense of success, I always felt that something was still lacking.  Despite the seemingly pluralistic conversation, I was very aware of the barriers and strong fears. I saw that even among other people who consider themselves to be open, there is a fear of getting too close, a fear of connection, and a fear of facing divergent views. And this fear often leads to alienation and even hatred. 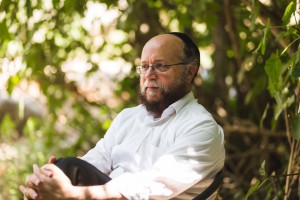 This phenomenon was not limited to “the street”. In academic institutions I noticed the use of demeaning terms like “hadata” (religionization) in order to silence those who dared to think differently. I participated in panel discussions which were seemingly devoted to giving space to a variety of opinions, but actually served to deny the legitimacy of the other. Even when we were able to have a respectful conversation, I saw how difficult it was to create a true place of meeting – one free of attempts to convince the other side, or alternatively, to play down legitimate differences in order to lend the superficial appearance of unity (or some sort of commonality). I felt that these were none other than poorly disguised attempts to present an idealized picture, to display agreement, mutual respect and understanding which in fact was lacking.

I had almost given up completely, but then I became acquainted with a different reality. I was invited to teach at a mechina whose staff truly represented the wide variety of perspectives in Israeli society.  At this mechina, the teachers and counselors had successfully fostered an atmosphere of respect and a genuine willingness and curiosity to learn about a wide variety of perspectives. Here were young people who had decided to devote a year of their lives, between high school and military service, to engage in deep, meaningful experiential learning. These young people came with a true desire to engage in open, honest dialogue, to accept the other as he or she is, to listen to differing voices with respect and with sincerity.

I truly believe that virtually any opinion which is expressed sincerely, which comes from a truly honest place, is legitimate and therefore deserves to be heard.  At the mechina, I feel free to express opinions which may well differ significantly from most of the others; and just as I feel free to do so, I know that others, both staff and students, feel free to do so as well. There is (almost) no consensus on which everyone must agree, and there are (almost) no positions that anyone would feel fear or apprehension about expressing and supporting.

In the contemporary Israeli social climate, in which a wide gamut of different, unusual and contradictory opinions can be found in the public discourse, the expression of unpopular views sometimes leads to “witch-hunts”, to subtle or not so subtle attempts to shut down legitimate and thoughtful debate. In such an environment, it is vital that frameworks exist for open and respectful discussion, in which we rise above our differences in order to truly hear others and appreciate varying points of view. I recommend to all those who don’t believe that this is possible, to come to the Hannaton Mechina and to interact with the students and the staff. Come and see for yourselves a place where one is knowingly and purposely exposed to a wide variety of points of view, which are often diametrically opposed to each other, thus fostering a meaningful environment for personal clarification and growth, and enabling the participants to deal with the many challenges of life in our complex world, from a position of connectedness and with deeply held values. While such people are aware of their weaknesses and shortcomings, they also know their strengths, and thus able to express themselves confidently and cogently, in ways which lead to positive and concrete actions.

The writer is a senior lecturer at the Hannaton Educational Center and teaches at the Hananton pre-army Mechina.  The original Hebrew article appeared in the Yisrael HaYom daily newspaper, July 7, 2019.