Director of Education at the Hannaton Educational Center

I was born in Guatemala City to a mixed Ashkenazic and Sephardic family. There, we were members of the Reform temple and I have many memories playing on the big lion statues outside the Sephardic synagogue or on the spiral steps of the Ashkenazic synagogue.

My first observation regarding religion occurred when I arrived in Israel at the age of nine. Here in Israel you needed to state what you were. At first, this statement referred to “religious” or “not religious”. Next, came another label if you happened to have one: Masorti, Reform, Ashkenazi, Sephardi.

As I grew up in Israel, particularly once I started getting involved in the NOAM youth movement and made friends who had Anglo parents, I was preoccupied with comparisons of what is was to grow up in different cultures. I had an attraction to American Jews, especially, and thought it was awesome that we in NOAM had a sister movement in USY. At the same time, however, I was put off by visiting American teens, and, like many of my Israeli peers, threw around the phrase “Ameri-kaki” or “stupid Americans.”

Fast forward to my adulthood and parenthood. We’ve lived in the U.S. twice, once for four years and once for three. Both times, the question of staying in the U.S. after shlichut service came up. Both times I was very clear: I want my children to be Israeli.

By our second stay in the U.S., we already had three children. We moved from Israel to Chicago and fell in love with the community there. For the first time in my adult life, I felt surrounded by parents who shared our values, in contrast to the handful I had found here in Israel. The kids lived and learned respect, manners, and pluralism. When we arrived and enrolled my children in the Jewish day school, they were shocked by being in a school where children wore kippot and incorporated into their schedule daily prayers. By the time they left, they thought nothing of it. 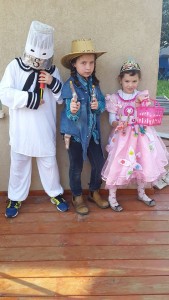 Yet I missed many things about Israeli education. I was thrilled to share certain values with my new American friends, but felt the lack of other important values I shared with parents in Israel.   I missed students having and vocalizing strong opinions. I missed how initiative and leadership were encouraged.  I missed the large range of emotions kids in Israel are taught to feel: dismay, anger, excitement. I missed how Jewish holidays are part of society’s DNA.

I increasingly felt that the strengths of American Jewry were the precise weaknesses in Israeli Jewry and vice versa.

One night, we had a good bye dinner for the school shlichim– two young men who were volunteering in my kids’ school. I went as a parent and as a professional who had been very involved in mentoring them and guiding the school on how best to work with them.

I sat next to Judy, the head of school and we talked about Israelis vs. Jewish Americans. For the first time, it occurred to me that the biggest service we could do to the Jewish people might be to come up with a new prototype of Jew: one that combines both cultures.

I realized during that time and particularly in the midst of that conversation that by going on shlichut, I actually created a hybrid Jew. My children would be very much Israeli, but with a cut of American inside them as well. That idea excited me, even though I know it doesn’t come without its own set of consequences.

But can that be done on a larger scale? What do we actually need to do to begin that merging of qualities? That hybridization?

When we returned to Israel last year, I realized precisely how difficult that task is. In Chicago, the Israelis felt it impossible to truly fit in with their American Jewish counterparts.. Instead, they congregated with each other, creating a parallel infrastructure of Jewish community. On Hannaton, where we live now, I see a similar issue: a fairly large Anglo community attracted to each other within the larger Israeli community. And here too, you can see it:  the Jews who associate more as American and those who identify as more Israeli struggle sometimes with finding a common language or solution to problems. In the end, it’s sometimes easier for each group to socialize with itself.

For me, creating a place where Jews can meet other Jews has become a core value in my life. In light of the latest Pew research, it seems to me that it’s urgent. As Jews we are drifting farther and farther apart.

At the educational center, we hope to create precisely that setting: a place where Jews from around the world can learn together, exchange ideas and learn from each other. Religious Jews, secular Jews. American Jews, Israeli Jews. Jews and non-Jews. We aim to create a haven where that feeling of distance and impossible gap might be bridged.

My feeling is that by doing this- we just might be creating an environment where my dream becomes tangible…maybe, here at Hannaton, will be the birthplace of the new Jewish prototype.